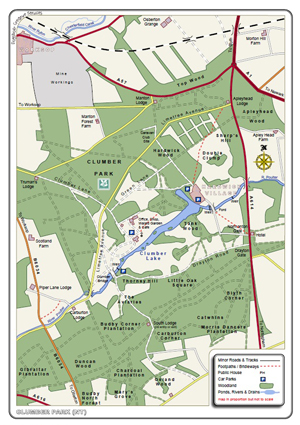 
Facilities: Parking available throughout Clumber (Vehicle charge £7 per vehicle, free parking for National Trust members.). Coaches (20+ people), cyclists and pedestrians free. Toilets in the main visitor facilities, by the cricket pitch and in Hardwick Village. Fully-licensed café serving a range of hot and cold snacks and meals using fresh, seasonal local produce. Lunches served between 12 noon and 3pm. Kiosks serving drinks, snacks, soup and ice-creams open at peak times. Baby changing facilities available in the toilets by the main visitor facilities and upstairs in the café. Baby feeding facilities available in the Café, including bottle warmer and microwave. Children's menu available in the Café. Buggies, child seats and trailer bikes can be hired from the Cycle Hire Centre


Habitat: Heathland - consists of ling and heather, some heathland is "grass" heathland, with lots of hairgrass. Has scattered Oak, Birch, Scots Pine, Gorse and Hawthorn. Farmland - mainly arable, but some sheep pasture. Woodland - has large areas of Oak, Birch, Beech and Sweet Chestnut plus plantations of Spruce and Pine and not forgetting the long avenue of Lime Trees. Lakes and the River Poulter - open water with alder plantations and reeds.

The Main Lake - Made by damming the Poulter, it is about 90 acres in area, being fairly shallow, but usually with steep banks. It gained several acres in size when heathland to the north-east end sank, because of mining subsidence. The lake is used for coarse fishing, but no water sports take place on it, meaning that most wildfowl is undisturbed. It was one of the first breeding sites of Gadwall in the county. Goosander winter in some numbers here (maybe as high as 50 birds). The lake edges can also attract the odd passage wader with Common and Green Sandpiper almost annual.

The Chapel and Lincoln Terrace - Along with the area between the Carburton and Clumber bridges, the best part of the park for woodland birds. The area around the Chapel and back to the buildings is the traditional one for Hawfinches. Marsh Tit, Nuthatch, Tree Creeper and Coal Tit are easily seen. As the birds here are used to people walking by, scattering some seed on a tree stump and retiring a few metres will give some excellent photographic opportunities. The lake has a wide variety of waterfowl especially in winter, with large flocks of Pochard, Wigeon and regular Goldeneye and Goosander. Mandarin are also regular from the Clumber bridge. This area of the park is a very popular area for visitors, so an early morning visit is advised.

Hardwick Ford area - The reedbed here was formed by mining subsidence a few years ago. This used to be the site of a huge Swallow roost in past autumns, but now numbers, though still substantial are a lot less. Hobbys can be seen here hunting the hirundines in August and early September. The fields and hedges around here are also worth a look, especially in winter, for finches and buntings. This area is mainly wooded with a wide variety of trees and shrubs, from Yew to Oak to Beech to Scots Pine and has a good selection of birds, including Willow Tit, Woodpeckers and in the summer Blackcaps. Mandarin can be seen in this area from time to time.

The South Lawn - Mainly open heathland. Great Grey Shrike are always worth looking for in the winter, with overwintering birds found in 1998-99 and another 2004-05. Tree Pipit, Common Redstart, Willow Warbler, Common Whitethroat and Yellowhammer all breed in the summer.

Hawfinch are one of the main attractions for birders visiting the area in late winter early spring. This population seems to have declined in recent years but can be still be found in small numbers in the trees behind the chaple.

Firecrest is always possible in winter and is worth looking/listening for in the Rhododendron scrub, as it has been recorded in the winter months on several occasions.