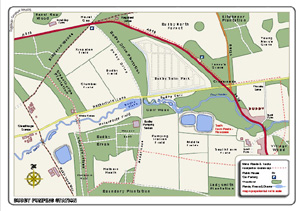 
Introduction: Having spent over 30 years without a local migrant hotspot around Warsop the accidental formation of this Flash has been a very welcome development. The site will never compete with the larger waters and higher viewpoints elsewhere in the county but hopefully time will continue to produce the odd reward! I present the landowners with a report at the end of each year, and hopefully that might influence their thinking regarding the long term future of this site.

The area is always worth a quick scan while passing. The whole site is best viewed from the Bridge over the River Meden which lies on the access lane to the Pumping Station. The verges adjacent to the bridge are wide enough to allow easy parking, but please refrain from parking actually on the bridge if other observers are present as this restricts the view which is already limited. Please remember that the land on both sides of the access lane adjacent to the Flash is all private and heavily keepered. Further parking is available further south along the access lane just beyond the Pumping Station. The lane beyond the barrier there continues into the Birklands and Budby Forests, with excellent heathland birding including very watchable Woodcock , Nightjars and Tree Pipits. The White Gates Bridge over the River Meden at SK597703 is another fairly reliable site for Mandarin.


History: Budby Pumping Station Flash was formed by mining subsidence during the summer of 2007. The River Meden formerly flowed through pasture fields, which occasionally flooded slightly in the winter months. The Flash lies on the southern side of Netherfield Lane just east of Gleadthorpe between Meden Vale and Budby at SK604704.

Birds and Habitats: Budby Pumping Station Flash is heavily watched from the Bridge over the River Meden by a very patient team of regular observers, and this coverage produces a steady flow of interesting records.

The River Meden now flows through the middle of the Flash, which keeps it largely ice-free and also ensures that the water holds a healthy fish population. Some parts are very shallow, making it attractive to dabbling ducks, with Mallard (maximum count 250), Gadwall (165) and Eurasian Teal (51) usually present and Shoveler, Eurasian Wigeon, Goosander and Shelduck noted more irregularly. Mandarin is often seen here. In the deeper areas Tufted Duck (58) and Pochard (9) can be seen, the latter more often during spring and summer. Of these species Mallard, Gadwall, Mandarin, Tufted Duck and Pochard have all bred here, along with Canada and Greylag Geese, Great Crested and Little Grebes and Mute Swan. Grey Heron and Great Cormorant are often present, and the bridge over the River Meden here is surely one of the best places around for close views of Kingfisher, Water Rail and Grey Wagtail. One or two Little Egrets are now regularly present throughout the year.

The muddy shorelines at the western end of the Flash attract the odd wader. The only regular species are Little Ringed Plover, Oystercatcher, Common Snipe and Green Sandpiper, but the site has also attracted Greenshank, Spotted Redshank, Common and Wood Sandpiper, Dunlin, Ruff, Whimbrel, Black-tailed and Bar-tailed Godwits, Sanderling and Turnstone. There is obviously potential for adding to this list if we get low water levels at the correct time of year but this hasn’t happened yet, and during the last two summers the water level has stubbornly refused to drop, leading to most of our recent wader sightings being flyovers.

Passerines are also attracted to the Flash, with Whinchat, Stonechat and Northern Wheatear noted on passage and Great Grey Shrike seen during the last 3 winters. Bohemian Waxwings are regularly attracted to the Bridge area during invasion winters, and Common Redpolls sometimes join finch flocks around the Flash.

To the east of the bridge lies Budby Carr, an undisturbed area of willow and hawthorn scrub with stands of silver birch and alder surrounding shallow flood pools adjacent to the river. This area is rather difficult to view as it is strictly private and can only really be seen from the bridge adjacent to the eastern end of the Flash. The trees hold feeding flocks of Lesser Redpolls, Siskins and winter thrushes, and up to 4 Water Rails winter here along with good numbers of dabbling duck. This is the main area for Mandarin on the patch, with a maximum count of 36 birds seen. Large tit flocks roam the area outside the breeding season, with Marsh usually present, and these flocks hold good numbers of migrant warblers in autumn, Chiffchaffs being particularly abundant. Spotted Flycatchers are regularly present in autumn. The much-vandalised feeders at the Bridge are very reliable for Marsh Tit.

The fields surrounding the Flash attract sizeable feeding flocks of geese, pigeons, larks and finches throughout the year, with numbers of Greenfinch, Goldfinch and Linnet often evident just on the north side of Netherfield Lane. A large Brambling flock was present here during the winter of 2007/2008, which is probably when most local birders first saw this site mentioned on their pagers. Yellow wagtail, Yellowhammer and Reed Bunting all breed in these fields. The feeding flocks of birds regularly attract interest from raptors, 12 species of which have been recorded here so far. The site regularly hosts up to 4 Hobby, and Osprey has been a frequent visitor. Honey Buzzard, Red Kite and Hen Harrier have been noted here, while Peregrine and Goshawk are regular visitors, with Merlin seen during most winters. The Bridge is a good viewpoint to scan for raptors, and anyone putting in the hours will be rewarded.

The last area of interest at the site is the potential for visible migration watching. Unfortunately we have no high viewpoint to count from, but from the Bridge movement through the Meden Valley is often evident, with geese, gulls, corvids, pigeons, thrushes and finches particularly common at times. Flyovers such as Iceland, Little, Mediterranean and Yellow-legged Gulls, Kittiwake, Arctic Tern and Rock Pipit have been noted on several occasions.

The site bird list currently stands at a creditable 177 species.

I will always be grateful to receive any sightings or counts from this site for addition to the database, and can be contacted by email on dmorton2@tiscali.co.uk.