During this period of lockdown restrictions for Corvid-19, it has been decided to once again revert back to weekly updates to discourage social gatherings.

Weekly updates will be put out each Sunday evening and will continue until government restrictions are lifted.

Headon - WAXWING [one observed for ten minutes in a private garden before flying off].

North Muskham - Smew [one at lake this morning].

Worksop Canch - 2 Mandarin [both drakes on the River Ryton].

Hickling - Mandarin [with Mallards on the Grantham Canal].

Stoke Bardolph - Ruddy Shelduck [one on the Shelford bank of the Trent from at 14:50].

Church Laneham - KNOT [on floods by the River Trent 1km north of the village 16:30].

Holme Pierrepont - BITTERN [in flight over reedbed at Works Pit].

Hoveringham - Great Northern Diver [juvenile still on Railway Pit], Stonechat [in set aside at the edge of village].

Larger images of most of these photos can be viewed in the 2020 Gallery. 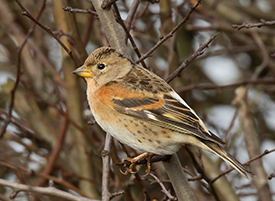